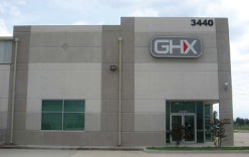 GHX Industrial, LLC was formed in 2007 by The CapStreet Group and management. GHX then acquired the assets of the following select group of premier hose and gasket operations with histories going back as far as 1927.

CV Harold – This New Orleans based company was founded in 1927 by Claude Harold and his brother to serve the industry and process plants along the Mississippi River in the greater New Orleans, Louisiana area.

Houston Gasket and Packing – This Houston, Texas based company was founded in 1938 by Herb Crawford. Mr. Crawford would fabricate gaskets at night in his garage and make deliveries on his bicycle by day.

Bayou Gasket and Hose – This Beaumont, Texas based distributor was founded in 1961 by Herb Crawford as he began to expand his operations eastward and to serve this important market area for process plants in the Beaumont – Port Arthur, Texas area.

Corpus Christi Rubber – This Corpus Christi based company was founded in 1968 by Herb Crawford as he continued to expand his operations along the Gulf Coast and to serve this important market area for process plants in the Corpus Christi, Texas area.

Bayou Gasket and Hose of Louisiana – This West Lake Louisiana company was founded in 1987 by Herb Crawford as he continued to expand his operations along the Gulf Coast and to serve this important market area for process plants in the Lake Charles , Louisiana area. This operation was also a leader and innovator in the vendor city, or vendor managed inventory program with a major Fortune 500 customer.

Specialty Rubber and Gasket (SRG) – The assets of SRG’s Pasadena, Texas operation were acquired in 1997. This location of SRG was primarily a distributor and fabricator of metal hose supplied to the power industry.

Since the formation of GHX Industrial in 2007, we have continued to grow and expand both through acquisition and by opening new branches.

All Hose and Specialty – This Broussard, Louisiana based value-added distributor of oilfield hoses joined forces with GHX in late 2007. All Hose provides greater geographic coverage in South Louisiana, and adds a significant amount of oil field expertise.

Sykes Supply or SSC - This Pensacola, Florida based value-added distributor of sealing products and mechanical seal repair joined forces with GHX in late 2007. SSC provides wider geographic coverage in the Florida panhandle and also in Mobile Alabama where another store is located.

Trident Supply – This Jacksonville, Florida based value-added distributor of hoses joined forces with GHX in 2010. Trident Supply provides coverage in the North eastern part of Florida and Southern Georgia. Trident also adds a significant amount of marine expertise as many of their customers are in the marine industry.

In 2010 GHX opened new locations outside of Baton Rouge Louisiana (Geismer) to better serve those strategic customers along the Mississippi river in and around Baton Rouge and in the South Western part of Pennsylvanian in Uniontown to better serve our customers in that area of the Marcellus shale.

GHX continues to grow by opening new branches and is always looking for good companies that want to grow with us and be a part of GHX.